Optimistic about the Future 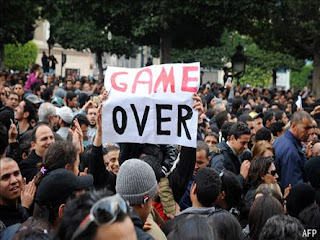 You might have heard about 'Jasmine Revolution' or 'Tunisian Revolution' where citizens fed up the rule of corrupt and uncaring dictators revolted against the dictator Zine el-Abidine Ben Ali, of Tunisia, and overthrew him. He was ruling them for the past 23 years. They changed the rules in their country such that they can continue ruling their country forever. But it was not to be, as the young people fed up of unemployment and no prospects of a better future took the matters in their hands. They had no leader. They  organized among themselves with social media tools like Facebook and Twitter and the good old sms. With peaceful protests ( comparatively, though some people died), they were able to change the regime.


This news inspired me very much and I was not alone as the neighboring countries like Egypt and Yemen also drew inspiration and decided enough was enough and are protesting against their dictators. Especially in Egypt, the protests are still continuing. It has been six days and about a 100 people have become martyrs, but still the people are hopeful that Hosni Mubarak's 30 year regime is going to end. I really wish they are successful in bringing about change.


Both of these news have given me immense hope that the youth of India will revolt against the ever increasing corruption in India. I also wish that we all realize that it is not required that everyone has to go into dire conditions as people in Egypt are in now as we have the opportunity provided by democracy to vote a government out of power every 5 years. Its a pity that there are very few good candidates standing in the elections, but it is never too late to encourage good people into politics by voting and voting correctly, by demanding transparency and an end to corruption.


I hope the scent of Jasmine Revolution affect Indian citizens too. :)

Posted by Ananth at 8:43 AM No comments:

Friedman writes in the NYT about Singapore.


"Top bureaucrats and cabinet ministers have their pay linked to top private sector wages, so most make well over $1 million a year, and their bonuses are tied to the country’s annual G.D.P. growth rate. It means the government can attract high-quality professionals and corruption is low."

How simple is it to add a little accountability into our political system in India ? It is in the hands of our generation. If the pay was comparable to private sector jobs and had good accountability, I am sure, more people will be interested in coming to politics than now. Now, politics is not a viable career opportunity, if you are not corrupt but this change would make it attractive overnight. No wonder, Singapore was able to eliminate corruption in a decade.
Posted by Ananth at 8:00 AM No comments:

"I'll go further and say that the repeated compulsion to resolve and resolve and resolve is actually a terrific marker that you're not really ready to change anything in a grownup and sustainable way. You probably just want another magic wand."
How true. You can never make life changing changes at once. At best, you will struggle to keep them for a few days or worst not even one day. Better option would be to make simple changes and act on them. Excellent post by Marlin Mann here

These days I am watching a lot of movies online.  I have discovered couple of great resources to discover and watch movies online. I go to IMDBs top 250 list and just browse through the descriptions and decide on one movie. Then go to one site and search for it and watch it. As simple as that. So whenever I feel bored, I am watching a movie. In this way I discovered some very good movies and some movies have touched me a lot and some of them have inspired me and some have haunted me (not literally but because of the emotions which they evoke). Today I have watched a particularly haunting and a dark movie that I am sure, I will give a break to this movie watching spree.

Without further ado, I present some of the best movies I have watched. I will start with some haunting movies to the heart warming movies.

Grave Of the Fireflies:This movie is a tragic tale of a young child Seita and his baby sister Setsuko during the time of second world war. Their father is in the navy and their mother is killed in a bomb raid on their place. It shows their struggles after losing their parents to live. The Setsuko is so sweet and you almost can't see her suffering and Seita's love for his sister is very touching. If you see this movie you will not want any other war for sure. The innocence and sweetness of the actors will haunt you always.

Revolutionary Road: This movie was recommended to me by my friend Gautam. It is the story of a young couple whose life seems fine from outside. They have a good house, the husband (DeCaprio) works in New York and the wife (Kate Winslet) stays at home with their two children. Winslet wanted to be an actor but gives it up. They feel something is missing in their life so they hatch up a plan to leave everything and snift to Paris. When everything seems ready for that, De Caprio takes a counter offer their manager makes when  he informs him that he is leaving. When  he tells this to Winslet, she is very unhappy and feels very bad. When De Caprio understands that Winslet is not happy, he rationalizes himself and says that Winslet doesn't love him or thier children. Out of guilt, Winslet tries to abort a child whom she is carrying, with crude instruments herself. That doesn't go well and she dies due to loss  of blood. The mesmerizing action of De caprio and Kate Winslet will leave you spell bound. The skeleton of the man, De Caprio  is left after Kate's death will haunt you and teach you not to take loved ones for granted. Thanks Gautam for a really must watch recommendation.

Its a Wonderful Life: This is the story of a man who dreams of travelling all over the world but has to settle in his town to serve the people in his town. The acting of James Stewart as the idealistic young man, Donna Reed as a supportive wife and a heartwarming story leave you asking for more and wishing that people were so good.

Mr Smith Goes to Washington: This is another story of idealistic James Stewart as a senator from a southern state, trying to fight against graft and corruption in government projects. The stubbornness of James even after it seems everything is lost leaves you wishing the same kind of people in our politics. It just shows the contrast with our current political conditions.

Good Will Hunting: I watched this movie after I saw a post on Reddit in the best of posts for 2010. Will Hunting, a mathematical prodigy takes up a janitorial job at MIT. A professor discovers his prowess and wants him to help him in research. As Will is difficult to work with, he takes the help of a psychologist to help him who teaches Will the valuable lesson that you can always criticize from the sidelines but life is not meant to be lived that way. It is meant to be lived and experienced.

Yes Man: In this movie, Jim Carrey's wife leaves him and he becomes a 'No Man' literally which means he is closed to all opportunities. One day, when he doesn't get the promotion he deserves he goes to a seminar upon the force of his friend and is challenged to say yes to every opportunity he gets. His life soon changes and lot of good things like unexpected promotion, a new girlfriend comes into his life. But he gets into problems because of saying yes to everything which is soon resolved when he realizes that, the condition was just to get him opened up and as he is more open now, he can say yes to whatever he really wants. Really a good watch.

How to train your dragon: This story tells us about a village on a hill which has vikings and dragons and there is always a fight between them. Ages have gone by with the vikings fighting the dragons and dragons fighting them. A young guy who is sidelined as he is deemed too weak to fight by his father, secretly shoots a dragon and injures it. He goes after it and finds that it is scared. He helps heal its injury and becomes friends with it and names it Toothless. His father enrolls him in a dragon fighting camp. With the understanding he gets of dragons playing with Toothless, he wins the competition held after the training camp and is given the opportunity to kill a dragon. But he refuses to kill it, wanting to show to the people that dragons only attack for defense. But the villagers refuse to listen and attack the dragon which retaliates and tries to till the boy. Toothless comes to his defense but is captured by the villagers. The boy tries to explain to the villagers that there is a nest of the dragons and if they don't bring food the dragons themselves will be killed by a giant dragon. The villagers use Toothless to find the dragon nest and destroy it. But the giant dragon attacks them but the day is saved when toothless and the remaining dragons which the villagers have caught help them win over the giant dragon with the help of the boy. The story shows how difficult it is to convince others against their beliefs and how you should stick to your belief till others see the light.
Posted by Ananth at 6:49 AM No comments: