In India, during winter all leaves fall, but they just turn brown and then fall. But in U.S as in spring, there is again a riot of colors, yellow, red and orange and start falling down. Actually, all those colors are already present in the leaf because the green pigment, chlorophyll which is used in photosynthesis dominates. But with the nights becoming longer than days, the leaves fail to get enough sunlight to perform photosynthesis. So the plants try to shed the extra leaves and stop creating the green pigment used in photosynthesis. That is when we get to see the hidden colors in the leaves. Though you have to see it to enjoy it fully, I have captured a few pics which let you imagine the vibrance.


http://www.flickr.com/photos/thisisananth/tags/fall/show/
Posted by Ananth at 9:40 AM No comments:

I joined in my first job in 2006 and the first year of work was very interesting in that I learnt new things and discovered the wonder of programming. Then it started wearing off as the more I learnt for what was required in my job and got better at that. The learning began to plateau and so did the excitement to work. But it all changed  again and I find myself very excited to program and develop because of the development of smartphones. There are two factors for that.

Always on devices: Previously if we developed an software application, we have to have a system to use it. This would disqualify most of the people in our country because not everyone has a system. Even for those who have a system, they are not always in front of a computer. But the smartphone changes that. now we have a computer which is always on with lot of sensors in it which highly increases the number and variety of practical applications that could be built.

Accessible Development: Previously developing and releasing an application was a non-trivial thing. But now a days, development of a trivial application using android is a breeze and it is easy to release it and update it which makes it easy to develop an application and continously improve it. Though this may not be a big reason for people who are used to developing applications, I feel it has greatly lowered the barrier to entry for developing apps and it plays big role in making me jump into it.

So if you have any great ideas and want to implement it, then just dive in and start developing. If you are a good android developer and are interested in developing a cool app, get in touch with me  at thisisananth@gmail.com
Posted by Ananth at 10:56 AM No comments:

I got my first car last week, an old Toyota Corolla car and I am just driving to and from office.This is not a new fact but the roads here are amazing. Once I get on the highway, there are very very few interruptions and I can drive straight without looking for anyone coming from other side and that is a far more pleasant experience. 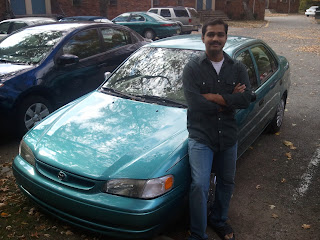 Its so great that they were able to plan 50 yrs ahead in 1960 when these higways were built. They are still quite good. May be I seem too pessimistic, but roads are one area where we don't have much hope when the chairman of the NHAI says it is not completely clean. Ofcourse nobody expected it to be clean anyway but all this has to change. Ofcourse, logical arguments like these never convinced anyone and I will write another post on it soon.
Posted by Ananth at 9:14 AM No comments: