Google Continues to Amaze me.

Today I was searching for 'Ramakrishna Math' on Google and little did I know that I was in for a surprise.
There is a result called  'Timeline results for Ramakrishna Math'
It lists the results by time, each twenty years and then allows to zoom in on each ten years and to each year also. 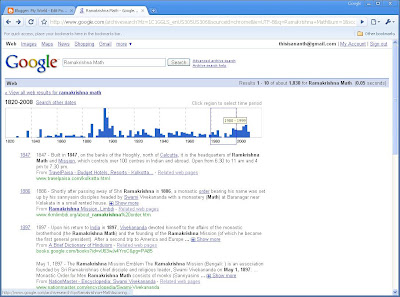 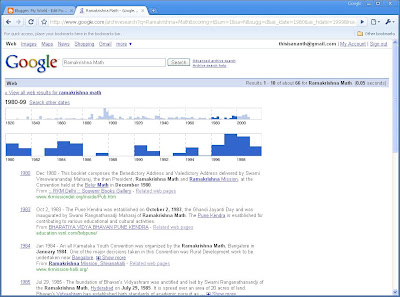 It is a very useful feature to explore the lifeline of organizations and lives of people.
Google is really great in the way it innovates.. Each of us can learn a lot from google about agility and innovation.
Posted by Ananth at 12:21 PM No comments:

Links to this post
Email ThisBlogThis!Share to TwitterShare to FacebookShare to Pinterest
Labels: google, innovation, interesting on web.

Obstacles to learning - How to make learning permanent

I am an avid reader. I read a lot, but lot of it is not sticky in the sense that I forget most of it soon. Though I read some for passing time, some being interesting and some more being necessary. I just came across this  post in Purple Pointr blog.
He mentions three reasons for it, namely not understanding the words, going too fast and missing some concepts and just reading the theory without application. Now I understand that i've been guilty of these three things which affected my retention of things learned. If we and use this, surely it would be of great help.
Ofcourse, the best way to get something is to teach it.
Posted by Ananth at 12:47 AM 2 comments:

Why should you be an entrepreneur...!!!

A great post on why one should be an entrepreneur and also what it does to you..

Consider this..
Its for those who change the lives of people around them, and in the entire process have their own lives changed. For those whose lives are not the same once they embark on the journey. For those who grow into Superman, Batman, Shaktimaan and Hanuman all in one. Those who seek to attain mastery over their art because they have no choice but to be the best at it for their startups. For those who know that their team’s lives will not be the same once they are done with the startup.

Posted using ShareThis
Posted by Ananth at 2:08 AM No comments:

iGoogle themes for a cause

Google is an amazing company...
Not just because it makes my life easy by providing the information I require in seconds, but because of their commitment to improve the world...
Visit google.org for their projects other than bread earners which are developed in labs.

Almost every product they have introduced has filled in a requirement for which there was no easy way before, my favorite products include gmail, gtalk, iGoogle, google news, notebook, maps and phone search.. I think each product deserves mention on this list but I should say I am addicted to igoogle.

Today they have announced themes for a cause where they have put up links for donation to various NGO's and charities. Its a great way to profile and introduce the organizations trying to reach people. My interests include education and clean energy.

Ashoka: Founded by Bill Drayton, a Mickensly manager, is one of the best changemaker. Ashoka's job is to make Everyone a Changemaker. It through its 'Global Collaboration Challenge' tries to identify those programs which can make the maximum impact for the society and support them. They select Ashoka fellows and ensure collaboration between them and finally help build the infrastructure for that progress to happen and thrive. Mohammed Yunus, is one of the famous Ashoka fellows. It is not a non-profit organization like others as they think themselves as social entrepreneurs and the societal change as the profit.
Posted by Ananth at 1:38 AM No comments:

Links to this post
Email ThisBlogThis!Share to TwitterShare to FacebookShare to Pinterest
Labels: changemaker, google, themes for a cause

My favorite songs for 2008... Except a few all will be worth hearing again and again...

I tried to put the links of all these songs here, but musicmazaa was not able to fetch them.. Will try to create a playlist and will update the link here..

Update:
This is the gadget

You have a choice - You are Response'able'

Nature wants us to react, to return blow for blow, cheating for cheating, lie for lie, to hit back with all our might. Then it requires a super divine power not to hit back, to keep control, to be unattached. - Swami Vivekananda

This is what Stephen Covey says - Between every stimulus and response, you have time to think, this is you are response'able' and hence you are responsible to whatever you do. If we can utilize this think time to stop hating people, forgiving people and spreading love, the world should be much more lovely place to live.
Posted by Ananth at 6:24 AM No comments: